Fibromyalgia (FM) is a chronic condition characterized by pain, stiffness, and tenderness of the muscles, tendons, and joints. Accompanying this pain is often a general depletion in overall health and wellbeing.

It is one of the most common diseases affecting the muscles; however the painful tissues are not a result of tissue inflammation. Therefore, despite potentially disabling body pain, people who suffer from fibromyalgia do not develop body damage or deformity, and there is no associated damage to internal body organs. This makes fibromyalgia distinct from many other rheumatic conditions such as rheumatoid arthritis and lupus, where the pain is primarily due to inflammation. These conditions may also lead to joint deformity and body damage.

Who does it affect?

What are the characteristics of the pain?

There is a large spectrum of fibromyalgia. Some people only experience mild pain and will continue their normal activities and lifestyle. Others will be in constant, excruciating pain. Disability is common. Fibromyalgia pain affects the skeletal muscles, ligaments, and tendons in the body. Pain can also be felt in

the bursa, the sacs that surround the joints providing nutrients and lubrication required for movement.

The pain can be widespread and experienced anywhere in the body; however there are eighteen particular tender points that are experienced by people who suffer from fibromyalgia. In order be diagnosed with the syndrome, one must have pain in at least eleven of these areas. These points are generally painful on both sides of the body.

These points seem to be where tendons and muscles join together. Neck, shoulder, lower back, waist ribs, buttocks and knees are the most common areas for fibromyalgia sufferers to have pain, but the pain can certainly migrate to other parts. Fibromyalgia pain is described as a deep and persistent ache. Many people also describe stabbing, throbbing, and shooting pains in their muscles. These pains can also leave a tingling or burning feeling just under the skin. Some claim that the pains are worse in the morning when the body is stiff; others say their pain gets progressively worse throughout the day.

What are symptoms of Fibromyalgia?

The primary symptom of fibromyalgia is pain. In addition, an FM sufferer’s pain threshold is unusually low so that “normal” amounts of pain are excruciating for a person with fibromyalgia. Noise, changes in the weather, and emotional stress can all aggravate the condition. 90 percent of people with fibromyalgia experience fatigue. Abnormal sleep patterns are commonly observed in people with FM, and they don’t appear to reach the deep, most rejuvenating part of sleep. In fact, reaching that restorative level of sleep called non-rapid-eye-movement (non-REM) may be more important than the length of sleep. Consequently, FM patients often awaken in the morning without feeling rested. Some patients arise with muscle aches or muscle fatigue that feels as if they had been “working out” all night. Poor concentration, forgetfulness, mood changes, irritability, depression, and anxiety are also hallmark symptoms of fibromyalgia. Other symptoms of fibromyalgia include migraine and tension headaches, numbness or tingling of different parts of the body, irritable bowel syndrome, and irritable bladder causing painful and frequent urination.

Is there a Cure for FM?

Unfortunately, there is no absolute cure for fibromyalgia.

Common treatments are geared toward improving the quality of sleep and reducing pain. Because deep sleep is so crucial to bodily functions such as tissue repair, antibody production, and regulation of neurotransmitters, hormones, and immune system regulators, the sleep problems that FMS patients suffer from is thought to be a major contributing factor.

Medicines that boost the body’s level of serotonin and norepinephrine (neurotransmitters that modulate sleep, pain, and immune system function) are commonly prescribed. While some patients respond well to these drugs, improvement varies from person to person. In addition, the medications may have side effects such as drowsiness, constipation, dry mouth, rash, headache, nervousness, tremors, dizziness, and increased appetite.

Non-steroidal anti-inflammatory drugs (NSAIDs) like ibuprofen may also be beneficial, though they should not be taken for long periods of time due to potential nephro-toxicity. Narcotic pain relievers, tranquilizers, and cortisone derivatives have been shown to be ineffective and should be avoided because of their potential side effects.

What can Chinese medicine do?

For thousands of years, Chinese medical texts have described successful treatments for illnesses similar to fibromyalgia. There are many people whose health has dramatically improved through certain treatments or combinations of treatments.

Chinese medicine views fibromyalgia as a condition resulting from general weakness of the liver, kidney, spleen and heart, caused by emotional stress, over strain, lack of adequate sleep and nutrition, and disturbed body rhythm – in other words, the body is out of “sync.”

One cause of fibromyalgia pain is described as, “Excess dampness.” Dampness is defined as a substance that moistens different systems in the body. Excess internal dampness causes pain and fatigue. Rainy weather can increase internal dampness which flares up your fibromyalgia symptoms. Excess dampness can also show up as a yeast, bacterial, or viral infection. As microorganisms and their waste products accumulate in your muscles and joints, you feel more pain and fatigue.

A Traditional Chinese Medicine practitioner completes a full assessment of a patient in order to accurately determine what imbalances are present. There are a number of different patterns that we see frequently with FMS and treatment should be tailored to each patient’s pattern. Acupuncture and Chinese herbal medicine can help control pain, increase energy and improve sleep and other symptoms. Fibromyalgia symptoms are greatly influenced by stress, amount of activity, and environment.

What can you do?

You feel much lighter and energized, as you clear out unhealthy dampness through acupuncture treatment, herbs, detoxification, and dietary changes. As your muscles and joints get cleaned of unhealthy gunk, your pain decreases too. You sleep better and feel hope for the first time in years. The real test is seeing how you react to the next rainstorm. Is your treatment helping you to pass the rainy day test?

You can get your hope back by implementing the right combination of dietary changes, detoxification, and treatment with a Chinese medicine practitioner.

For more information and make an appointment you may contact our office. 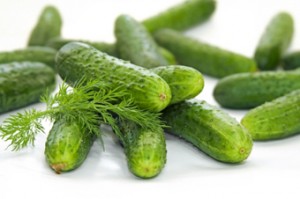 The cucumber, which is native to Asia, has been cultivated for many thousand years. In fact, seeds almost 12,000 years old were discovered in southwest Asia. Cucumbers were eaten in Egypt, which is documented in Bible, and valued as an easily digestive vegetable in ancient Greece and Rome. A member of the gourd, or the Cucurbitaceae, family, cucumbers are related to melons and similarly have a very high water content. The watery, freshly interior remains cool even during the warmest of temperatures – perhaps the origin of the expression “cool as a cucumber”. Because they hold large amount of water, cucumbers have diuretic and cleansing properties that are often used to treat edema and gout, assist weight reduction, cool fevers and help eliminate intestinal worms. In addition, the vegetable’s astringent and moisturizing qualities make it an effective skin care product for decreasing wrinkles, soothing sore feet and – best known of all – relieving puffy, tired eyes.

cucumbers are very alkaline, diuretic and cooling. They are astringent, anti-inflammatory and moisturizing, and when applied externally, they tighten skin, promote blood flow, soothe tissue and reduce swelling.

cucumbers contain high amount of water and roughage, moderate amount of potassium and magnesium and small amount of fat, protein, carbs, sodium, iron and calcium. The trace elements copper, selenium, iodine, zinc and manganese are also present. Furthermore, cucumbers contain vitamins A, B1, B2, B6, C, and K; biotin and niacin; and folic, malic, citric and pantothenic acids. 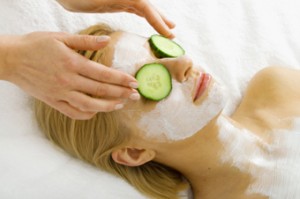 Perhaps the most famous medicinal use for the cucumber I putting a cold slice on the eyes after a long day. Its anti-inflammatory and astringent properties help soothe tired, inflamed eyes. Also, a poultice of mashed cucumber placed in cheesecloth can relieve bloodshot and itchy eyes due to hayfever and other allergies.

Cucumbers have a diuretic action that helps to neutralize and excrete the uric acid buildup in joints plagued by gout. Its diuretic effect may also prevent kidney and bladder stones.

The enzymes contained in cucumbers support protein metabolism, which helps cleanse and detoxify the intestines. Furthermore, the high water and roughage content can help to counteract constipation. These two functions are very important for weight loss.

Put mashed or sliced cucumber on bites to help reduce swelling and stinging.

Wash, peel and grate 3 cucumbers. Mix them with 3 oz. of plain yogurt and 1 tsp. of vinegar; chill. Spread the paste on the sunburn, leaving it on until cooling action stops.

This was Cleopatra skin-conditioning recipe (but she didn’t use a blender). Wash 2 unpeeled, non-waxed cucumbers, and place them in a blender. Add up to 1 pint of the whipping cream to make a smooth, thick paste. Blend in 1Tsp. of olive oil, 1 Tsp. of honey and 1 tsp. of cornstarch. Slice 1 lemon in half, and rub both halves over your face. Apply the cucumber paste, and lie down. Wash the paste off after 1 hour.

Wash, peel, seed and puree the pulp of 1 lb. cucumbers in a blender. Blend in 1 cup buttermilk or yogurt, and flavor with the dill or lemon juice. Drink 1 cup daily.

This article was posted in Newsletter. Bookmark the permalink. Follow comments with the RSS feed for this post. Both comments and trackbacks are closed.
14254558895